The bones of the world...

I am, or have been, what some call a "pantser". Not "chancer" - although I have been called that also (and probably accurately at that) but "one who writes by the seat of his/her (his in this case) pants".

This is as opposed to those who plan, outline, stories prior to writing. There's a line from the book, and the film, "Starting Out in the Evening" by Brian Morton, that goes "I follow my characters around until they do something interesting."

And so it is. Certainly I've approached any short fiction I have written this way. I may have an idea for a character, possibly an idea for a situation, and - sometimes - an idea of the ending. But mainly I like to be surprised where "things" go.

The two first drafts I wrote for NaNoWriMo 2008 and 2009 were also approached this way. And I was surprised by some things the characters did and both drafts did get to where I had an idea they would reach.

However, it strikes me that this approach may not be enough. In truth, my opinion is that ONE way is seldom if ever sufficient.

I've read a number (nine?) of novels by Peter F. Hamilton. The most recent five are a story told over two novels and another story, in the same universe but set 1,000 years later, told over three novels.

The books are "Pandora's Star", "Judas Unchained" and the three books in the "Void" series ("The Dreaming Void", "The Temporal Void" and "The Evolutionary Void").

They are all densely plotted with a myriad of characters, ranging across many planets and a variety of species. Hamilton even has time to deal with the practical implications for society of functional immortality.

Multiple viewpoints, interleaved and interlocking stories, and a grand narrative going on beneath leading to a satisfying conclusion.

This was not done by the seat of Hamilton's pants. I don't know this, of course, but it's a fairly safe bet.

I don't know how to do this. How to create the architecture for such a story. But it is a wonder to behold and a joy to read.

I'm all about the "intuitive". I play chess that way - meaning I lose more often than I win. Though I remember one particular win...such joy. (I was asked, "But, what if THIS has happened THERE?" I had no answer - because "this" wasn't going to happen "there". It simply wasn't - and didn't.)

I have an intuitive grasp of computer programming and software architecture, and sometimes have to backtrack from my solution to explain "how" I got there to others. Of course, that isn't "how" I got there. But it is how someone else might.

And so with writing. Except, for something as wide-ranging and limitless as a novel...some architecture, some "bones" need to be in place. Certainly if I want to tell any large-scale story.

So I need to come up with an intuitive approach to story architecture, something free-flowing but that results in a structure that can bear weight. I'm going to tackle NaNoWriMo 2010 this way. As always, these things are a work in progress. We'll see what happens.

On an entirely different subject (yeah, intuitive with a grasshopper mind - and I want structure??)

My Aurora Europa came back from having the nib re-ground and the ink flow increased. The pen had been problematic since I bought it. Now, it just glides over paper. 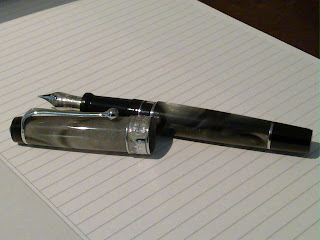