...View, Vista, Vision? Well, maybe the last one doesn't apply. But the others - Very much so. 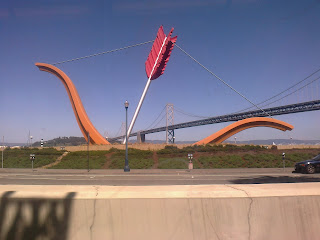 Off to the city today. It's always made me smile...you can stand in the center of San Jose and say "the city" - and everyone knows you're talking about the city at the other end of the peninsula. Such is the gravitational pull of San Francisco.

I mean, who wouldn't love a city that has such urban art (now, that would have been a good "U" day image/word) on display.

And, odd though it may seem, there is not universal approval for that sculpture.  De gustibus non est disputandum - it would seem. 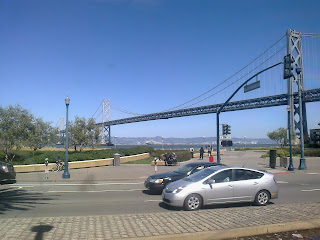 The City by the Bay has its beauties, (I'm talking geographically here - though I suppose...) not least of which is the Bay Bridge itself linking the East and West sides of the bay. I regret that, today, I wasn't able to get to see the other, somewhat more iconic bridge. But I was nowhere near the Golden Gate. 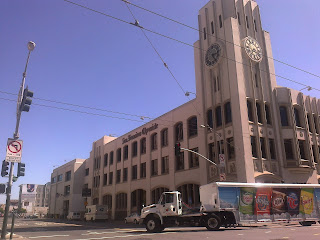 Rather, I was downtown, on 5th, when passing this building housing the San Francisco Chronicle - a paper dating from 1865.

A city of traditions - some of them the "only in San Francisco" kind of traditions. But, I suspect, many cities across the world have their own kind of "only in..."

Email ThisBlogThis!Share to TwitterShare to FacebookShare to Pinterest
Labels: A to Z Challenge