No - you may not buy this book!

And why ever not, I ask.

"The City and the Stars" by Arthur C. Clarke is one of Science Fiction's great works. I don't know how often I've read it. It bears re-reading.

And I bought it for my Kindle some time ago, from Amazon, in the US. I read it. Archived it. Today I was extolling the virtues of the book. We went to see what it cost on Amazon. Not there.

I thought I remembered buying it, nay buying and reading it, so I checked. Sure enough, there in my Digital Items it was. I clicked on the product information and the cover showed up.

And a note that it was not available to people living in the US. I live in the US. It is, however, available for purchasers from the Amazon UK site.

And there we have it, a concern I have about electronic books. If I want to read a book, but it's not published  here in the US, I get a friend or a relative to buy the book on my behalf (a friend of mine did that once for me - but instead of buying one copy of Paul Gallico's "Jennie", titled "The Abandoned" in the US, she bought six! The Lady C was ever thus.)

You can't do that with ebooks. Somehow, I'm not "allowed" own a book not made available in the US.

This is not good.

Lest anyone think that I'm not "for ebooks and e-readers", allow me to present my credentials. I've owned e-readers for well over a decade. My first was the Rocket E-Reader in the late nineties. The side of a large paperback and an ugly gray screen, it was a marvel in its day. 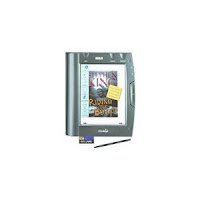 I progressed, after a couple of years,  to the Gemstar color e-reader, which had an Ethernet port (wired) that allowed, what today we would call, in-app purchases. In the end, I bought two of the Gemstars, as the device was discontinued after a few years.

Both of them are alive to this day. Both of them still capable of displaying the content they contain.

A Sony e-reader followed the Gemstar, later traded in for the next version of Sony's technology. Both versions were the new e-ink displays. The Sony still works, and still displays the over 100 books I own on that platform.


The first Kindle, then a Kindle DX, one iPad with Kindle software and now a color Nook (so I can see e-books I publish for that platform) mean that I am very much part of the e-book/e-reader enthusiast group.

I cannot do that with an e-book - the store won't sell it and thus I cannot get it onto my device for reading.

I've just now tried to download the copy I purchased at some time in the past to my Kindle app. There's an error in synching - so no book.