What to do with all these Haiku?

Those who have seen my tweets passing by in the timeline (what an odd construction that is...) or as part of the "news" page on facebook, or yet again, off to the right on this blog will have detected my fondness for the simple, though not easy, form of poetry known as Haiku.

How I love a sentence that runs pell-mell all over a page!

According to my Twitter page I've sent over 1,900 tweets. The vast majority of these will have been the short seventeen-syllable scraps of thought in poetic form. With enough practice you can get competent at anything. So, some of the haiku I've composed are good, arresting even. Some, by the same token, are pretty bad - but then, I'm recovering from a lifetime of perfectionist tendencies (not, I assure you, of perfection).

What to do with all these Haiku, I ask? Well, nothing actually. Nothing, at least with the vast majority of them. I quite like the fact that most of them are ephemeral. Less so than I thought as it turns out. I was quite surprised to discover how far back I could go along my Twitter timeline.

No matter, once composed and dropped into the timeline, I consider them off on their own. (Write if you get work, y'hear?)

However (there's always a "however", isn't there?), I've sometimes included a photograph I'd taken with a tweet, combining an image with the verse. These, of necessity, had to be hosted on some web site for viewing. And so they remained.

It was suggested that I might assemble them into an electronic book form. It's possible others might enjoy viewing and reading a collection of these #PhotoHaiku, as I called them within Twitter.

I imagined I might have sixteen or twenty to pull together. So it might make something interesting to view. I was wrong, I assembled over sixty of these photo and poetry combinations, grouping them into three sections:

I wondered how I was going to do it, and found that Scrivener, the tool I use on the Mac for my writing, has all the capabilities I needed to handle both the images and the text, in addition to generating native Kindle and Nook formats. The ePub format it generates also works for Apple's iBook - but Apple requires an ISBN - and I didn't have $125 handy. 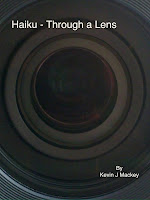 And so, Haiku - Through a Lens was born. I'm currently thinking through how best to launch it, but the act of pulling together the images and text, grouping them in some coherent way and generating the final output was invigorating.