A good way to begin this music related A to Z Challenge - a simultaneous performance, yesterday, of the 1928 film, The Passion of Joan of Arc, by French director, Carl Theodor Dryer and Voices of Light, music inspired by the film (and designed to parallel the images rather than attempt to add to the masterpiece - according to the composer, Richard Einhorn).

It was a Cal Performances presentation at Zellerbach Hall on the UC Berkeley campus. The Baltimore Symphony Orchestra under the baton of Marin Alsop (a good A-word name) performed the piece.

We were fortunate to have both Richard Einhorn and Marin Alsop on stage before the event for a 30-minute discussion on how the piece came about and some of Alsop's thoughts on the interpretation.

We first ran into the work when I was accumulating everything that Anonymous 4 (another good A-word) had recorded. I'd become very fond of the purity of this four-women a cappella ensemble's singing. 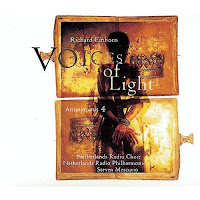 I found this "Voices Of Light" work, and was surprised. This was the first music performed by them that dated later than the Middle Ages I'd come across. 1994? It seemed far too modern for their style. Ah well, I get used to being wrong. I've done it enough over the years.

The music is ethereal at times, dramatic at times, heartbreaking at times. A small note, also mentioned by the composer last night: the bells heard in the piece are recordings Einhorn made of the church bells in Joan's native town in France. Some things are just perfect. 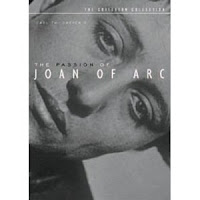 In reading, what in an earlier age would have been, the album notes I discovered the music was written to accompany a French silent movie - The Passion of Joan of Arc, from 1928. So, off again to Amazon to see what could be found. Criterion Collection delivered.

If you get the chance - see this movie, with or without the music. It's quite the work of art.