It was to have been a quick trip. Two-thirds of a day traveling on Saturday (because we were going against the sun), an evening, a day (Sunday) and a morning in Kansas City, and a half-a-day traveling back to SFO on Monday (this time going with the sun).

But it was all the time in between when the wheels came off the wagon - and where I learned a new phrase, the one serving as title for this post, "Airport appreciation".

We heard it as we took a shuttle from a hotel to an airport at a very early hour on Sunday morning. Two pilots were talking and I overheard,

"I had about three hours 'airport appreciation' yesterday," said one.

"That's happening a lot more lately," the other replied, "sitting around, going nowhere."

Tell me about it. We weren't supposed to be anywhere near an airport on Sunday morning, early or otherwise. But there we were.

The plane for the connecting flight on Saturday, in Chicago, broke down ("some mechanical difficulties", they said), so the flight was cancelled. Not to worry, there was another two flights. The first of which was already full, but we were booked (boarding passes and everything) on the second. The only fly in the ointment - the flight we were to be on didn't leave for another five and a half hours (or so).

Five and a half hours at the gate? No. Not doing that. Not, not, not.

As it turns out, we were fortunate enough to have the means to step into the American Airlines Admirals Club® for the day. It has a "Quiet Room" - no cell phones (well, no talking on them anyway) and a general air of quiet - no loud voices, good chairs. 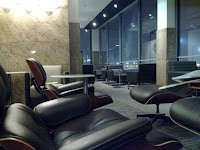 It was like being in church, you didn't want to talk above a whisper!

We spent many hours there Saturday - even got some food later in the evening. There were display panels showing flight information, so we could watch as the flight got more and more delayed.

From time to time a new departure time would be posted. Worse yet, my phone would ring  and a bright voice would announce the new time. And the time would pass (the bright voice neglected to mention this).

The flight had been diverted, but it finally left there and was in the air, en route to us! Cheers all round. Well almost. The woman beside me, who had just flown in that day from London, said, "The crew…". I told her to be quiet.

"You know what I was going to say, don't you?" she countered.

The plane landed, the passengers disembarked. And the crew left. They had passed over, through, by the number of hours they were legally allowed to fly.

A big surprise to the staff at the gate (something I yet don't understand).

"I told you," said the Londoner.

It was now 1:00 AM on Sunday. Flights were booked for the following day. Hotel vouchers were distributed. The hotel was 20 minutes away - on a good day. We watched the (small) shuttle fill three times before patience snapped. We took a different shuttle to a different hotel (one three minutes away from the airport).

Back to the airport later that morning, listening to flight crews talk of "airport appreciation".

We made it to Kansas City with minimal delay that morning - though we had to cancel the breakfast we had arranged with friends, and push our meeting that afternoon back an hour.

Oh, and one other thing. Our luggage wasn't on the flight with us.

It turned up after midnight Sunday evening. Cell phone chargers were all in the one checked bag - so our phones had died sometime Sunday.

It was good to get back to the Bay Area Monday, let me tell you.
Posted by KjM at 3:14 AM

Email ThisBlogThis!Share to TwitterShare to FacebookShare to Pinterest
Labels: Travel