B: Beatles - Across the Universe

I'm continuing the music theme - and, apparently, the movie theme. Musicals are, for me, difficult to digest. I mean, I've seen "Help", "A Hard Day's Night" - and am even aware of the "Tragical History Tour" by the Rutles :-)

But why on earth should people be walking along, and then (with a full orchestra backing them) burst into song?

I recall watching an interview with Hugh Jackman wherein he mentioned the director of Oklahoma telling the cast that they weren't allowed repeat the lines of the song, unless they could convey a clear reason for doing so - "There's a bright golden haze on the meadow, there's a..."

Not an easy task. 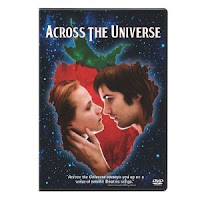 In "Across the Universe" (which would have been a good A-day entry) Julie Taymor gets the cast to sing Beatles songs - and they FIT! By the way, the cast really does their own singing.

Imagine a movie where "Happiness is a warm gun" actually works as a piece of dialogue. And "So, you say you want a revolution..." and has a character, Prudence, who comes in through the bathroom window (well, why wouldn't she?) and sings of another young woman - "...let me be your man..."

Add in that the two main characters are named Jude and Lucy - a girl who came to stay - and you know where it's all going.

If you are any sort of a Beatles fan, this is a great movie. If you enjoy a good love story (isn't love all you need?) and some great music, songs and singers (did I mention Bono and Joe Cocker?) this is for you.