I don't know how long I'll be able to keep this up, but I seem to have another movie to team with some music.

The music? Chant. Gregorian chant to be exact. I used to sing it, long time ago and far away. That last is true, in time, in space, in other ways also. 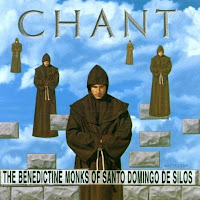 I consider the upwelling of interest in the form, over the past decade or so, as something fortuitous. It's enabled us to collect music that otherwise might not have been recorded.

There is something about the form, dating back a millennium (or so) that touches the listener. At least, so I believe. And, given the popularity of the good monks of Santo Domingo De Silos, others also believe it.

The first monks I heard, even before I began to sing Gregorian chant, were from the Abbey of Solesmes, in France. They were responsible for bringing the music form back into prominence long before the good Benedictines above.

And, you cannot say you've heard Gregorian chant until you've experienced Latin sung with a pronounced French "ue" sound in words like "Sanctus", "Alleluia", "sicut erat in principio, et nunc, et semper". It's the kind of thing that can stay with you for life.

And the movie? A rather special one, about a rather special calling. That of the Carthusians - those monks who gave the world the liqueur, Chartreuse. The only color, I'm told, that was named for a liqueur. And who are these monks?

Well, one way to find out is to view the movie, Into Great Silence. Be prepared for a journey quite unlike any you might otherwise take. The movie could qualify as silent, as there is little in the way of dialogue. One monk does speak. He is interviewed.

For the rest, silence, prayer, some laughter and chatting during a weekly walk. And time measured on a scale different to that we are accustomed to.

That last sinks in as the movie proceeds. But is underscored by an epilogue - presented as text at the end of the movie. The filmmaker had requested access to the Grande Chartreuse, the head monastery of the Carthusian Order. The response: they would consider it and would respond when it was time.

Thirteen years later, the response came back. Yes. It was time.
Posted by KjM at 12:29 AM