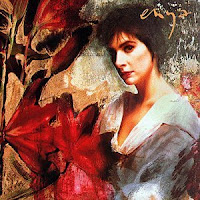 I became aware of Eyna (Eithne Brennan) with the release of her album "Watermark", back in the late 80s I believe it was. Sure, you couldn't turn around then without hearing "Orinoco Flow" coming at you from all directions.

And no bad thing, either. Most of the album appealed to me, with a special fondness for "Cursum Perficio" - because I'm fond of any form of singing in Latin, even if Enya's dense tracks and vocals are a far cry from Gregorian chant.

There are those who've said that one of Enya's albums sounds like any other. I don't agree. But music is a subjective business.

Enya is, of course, sister to another well-know Irish chanteuse, Máire Brennan of Clannad. Máire is also known as Moya - and now you see where "Enya" may have come from.

Clannad wrote theme music for a number of TV series. The theme for one of them, Harry's Game, reached the Top 5 in the British charts. For a song in Irish (Gaelic), that was quite an achievement. The series itself was highly-regarded, which helped, but the haunting music was what captured the listeners.